A legal number plate can be customised in the UK 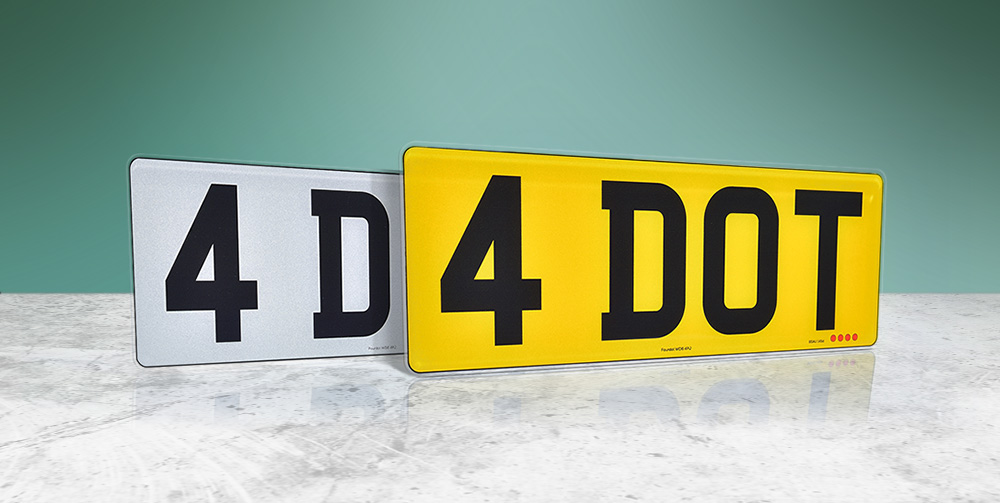 So you want to customise your number plate legally and not run the gauntlet or have the anxiety of being stopped by the police. In this article we will look at the options available to you but before we do let us outline the legal requirements. If you can’t wait the short answer is that is possible to customise your legal number plate. I did so recently and I will share my experience.

You could be fined up to £1,000 and your vehicle will fail its MOT test if you drive with incorrectly displayed number plates.

In 2001 a new vehicle registration format was brought in with the potential to provide enough legal number plate combinations to run until 2051. The current format consist of:

Principally, a number / license plate must clearly show the vehicles registration correctly. The letters and numbers must not be altered or rearranged as to make the plate illegible. The number plate must also:

The British Standard (BS AU 145d) was introduced in 2001 to combat the uncontrolled practice of number plate designs at the time. All reputable number plate suppliers must now ensure that number plates meet the strict requirements as defined by BS AU 145d. legal number plates in the United Kingdom are subject to the most stringent of tests in Europe and the world.

A new standard BS AU 145e will come into effect shortly to bolster the testing. It will include further tests to increase the readability by ANPR (Automatic Number Plate Recognition) cameras, which under the current standard can misread approximately 3% of plates. It will also improve the abrasion tests to ensure the plates better withstand debris from roads such as grit, salt and stones.

Number plates are subject to a series of tests

Number plates need to be resistant to a host of conditions including the following. In all there are 9 tests associated with BS AU 145d:

What can be customised on a legal number plate?

Number plates are limited in terms of the standard amount of customisation available. The use of 3D text using the Charles Write 2001 font is permissable for example. Number plates can optionally have national emblems and flags on the left-hand side of the number plate as follows:

Separately, legal advertising is permitted on number plates with a designated lip. This is typically an approach adopted by motor traders but as the advert falls outside of the legally controlled part of the number plate it offers a practical solution to advertise on a plate.

You’ll still need a GB sticker when travelling in Europe if you display one of these national flags and identifiers.

We should petition to remove the front number plate

That has been tried. In 2016 a UK Government petition was put forward Entitled ‘Remove the need to display a front number plate on a vehicle in the UK‘. It managed a total of 31,122 signatures from all over the UK but fell short of the 100,000 needed to be heard in Parliament. Perhaps the emphasis on the front number plate spoiling the cosmetic look of a vehicle was not strong enough an argument. The petition was closed in December 2016.

In the interests of road safety and to support law enforcement, the Government will not be changing the legal requirement for vehicles to display front and back number plates.

The future is now?

The UK is gearing up for the future. With the advent of smart cities and smart motorways all of which have a dependency on real-time data to enable them to predict, analyse and take appropriate actions. The ability to accurately read number plates becomes paramount. There is a shared responsibility between the motorist and the number plate supplier to ensure that a legal number plate adheres to the clearly defined standards. Motorists must ensure they display their number plates clearly and in accordance with the law. For suppliers the onus is on them to request entitlement details such as the V5C log book and the driving license of the persons requesting the number plate. The suppliers are also obliged to be register with the DVLA and maintain a log of the transaction as well as clearly display their postcode on the number plate.

Number plates are read by Automotive Number Plate Recognition (ANPR) cameras and are used by a host of organisations for different applications including:

So you can see where this is going. Cynically there is a big brother element to this but one could argue the real aim is to improve efficiency, decrease crime and increase the end user experience for motorists.

You can have a designer legal number plate, here’s how

I recently had some work done on my car to have the front windscreen decontaminated and coated with a few layers of Gtechniq water repellent coating. This was after a stone chip cracked my windscreen requiring a replacement. Marco at Lussivo mentioned the idea of having my number plates replaced with designer plates, to which I said no at first. I then slept on the idea and called him the next day to have the plates ordered and installed. The windscreen repellent procedure required a couple of days so Marco had the car with enough time to order and install my new plates. I had to share my details such as a scanned copy of my driving license and a copy of my V5C registration certificate before being able to place my order.

The plates were ordered from Fourdot who specialise in providing designer number plates that are fully road legal. They provide:

Fourdot use technologies such as 3D scanning and laser cutting techniques to provide both a personalised plate and service.

Fourdot Affinity Ltd is authorised by the DVLA with Supplier Identity Number 48070. You also receive a card that they recommend you keep in your vehicle in case you are stopped by the authorities. The card explains that the plates are legal.

I am very pleased with my Fourdot purchase and I can assure you this is not a paid advertising stunt. I have a five character number plate, which now enhances the cars appearance giving the car a different stance if you can understand that. This is because the design I have chosen from Fourdot effectively provides a standard length number plate but instead of being entirely white for the front or yellow for the rear. It only uses the background colour (white or yellow) for the Charles Wright 2001 Font. The rest of the number plate is as per your design (for me black) but in accordance with and certified to the BS AU 145d standard.

There are more informative blog articles from WheelsMatter. Thank you.

I visited Specialist Cars BMW in Stevenage a number of times before I purchased a car. At no point did I feel pressured and was END_OF_DOCUMENT_TOKEN_TO_BE_REPLACED

Look no further than Lussivo in Harlow if you are looking for the best in Car Detailing. For my new car I had Xpel Platinum END_OF_DOCUMENT_TOKEN_TO_BE_REPLACED

I thought long and hard before choosing to lease my first car. After signing up to the selectcarleasing.co.uk mailing list I compared prices and waited END_OF_DOCUMENT_TOKEN_TO_BE_REPLACED

I took my BMW 5 Series in for its first oil service just before Christmas 2020. I arrived early and left the car with them END_OF_DOCUMENT_TOKEN_TO_BE_REPLACED